If You need further details - Please write us

On Delhi arrival, your driver will meet you at the airport arrival hall with a Placard of your name. Then, just get in to car and relax and then you will be transferred to your pre-booked hotel in Delhi. You will be helped in Check-in to your hotel. Relax and rest in your hotel. Overnight stay in Delhi hotel.

Post breakfast, start your Delhi city tour with your Tour Guide and Driver. Visit Qutub Minar, India Gate and Humayun's Tomb. Qutab Minar is a soaring, 73 m-high tower of victory, built in 1193 by Qutab-ud-din Aibak immediately after the defeat of Delhi's last Hindu kingdom.The India Gate (originally called the All India War Memorial) is a war memorial to 70,000 soldiers of the British Indian Army who died in the period 1914–21 in the First World War, in France, Flanders, Mesopotamia, Persia, East Africa, Gallipoli and elsewhere in the Near and the Far East, and the Third Anglo-Afghan War. Humayun's tomb, built in 1570, is of particular cultural significance as it was the first garden-tomb on the Indian subcontinent. It inspired several major architectural innovations, culminating in the construction of the Taj Mahal. And, you will be driven pass through Government buildings The President's House and Parliament House all of the time of British. Overnight stay in Delhi Hotel.

In the morning, after breakfast check-out from your hotel and you will be driven to Agra. It's almost 210 KM journey of 4 hrs. On Agra arrival, you will be helped to check-in to your pre-booked hotel in Agra. Relax in hotel. In the evening, you can enjoy the sunset view of Taj Mahal from Mehtab Bagh. Mehtab Bagh (Moonlight Garden) is a charbagh complex in Agra and it lies north of the Taj Mahal complex and the Agra Fort on the opposite side of the Yamuna River. Overnight stay in Hotel in Agra.

Early morning, start the tour with a beautiful & stunning sunrise view of Taj Mahal, the magnificent monument that stands at the heart of India has a story that has been melting the hearts of millions of listeners since the time Taj has been visible. A story, that although ended back in 1631, continues to live on in the form of Taj Mahal and is considered a living example of eternal love. It's the love story of Shah Jahan and Mumtaz Mahal. Return to hotel for buffet breakfast. After lunch, visit massive Agra Fort and Mehtab Bagh. Agra Fort, a symbol of power, strength and resilience, as it stands today in full glory. The Agra Fort, also known as the “Lal –Qila”, “Fort Rouge” or “Qila-i-Akbari”, is the highlight of the city of Agra, then capital of the Mughal Sultanate. Overnight stay in Hotel in Agra.

After breakfast, check-out from your hotel and will be driven to Jaipur, Rajasthan. On the way to Jaiour, you will get a chance to visit another UNESCO world heritage site named Fatehpur Sikri (also known as Ghost city). It'll take around one hour drive (43 KM from Agra). It's a blend of Indo-Islamic architecture. It has palaces, harems, buildings, courts and a mosque, emperor's Bedroom & one of the best architectural wonders of Fatehpur Sikri is the Buland Darwaza, a grand gateway to the walled city. After visiting Fatehpur Sikri, continue your drive to Jaipur. On Jaipur arrival, check-in to your pre-booked hotel in Jaipur. Overnight stay in Jaipur.

This morning after breakfast & Hotel check-out, you will be driven to Delhi. It'll take approx. 5-6 hours for 260 KM. Just relax in the car and enjoy the out beauty from the window of your car. Here, you reach Delhi and there you will be dropped off to your Hotel/Airport or any preferred location in Delhi.

END OF TOUR WITH AMAZING EXPERIENCE AND UNFORGETTABLE MEMORIES Note: TAJ MAHAL REMAINS CLOSED ON EVERY FRIDAY. The time and duration of transfers are approximate, the exact duration will depend on the time of day, weather and traffic conditions 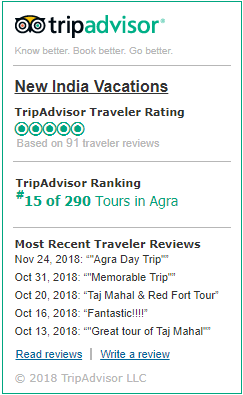